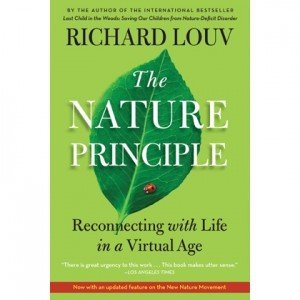 The future will belong to the nature-smart—those individuals, families, businesses, and political leaders who develop a deeper understanding of the transformative power of the natural world and who balance the virtual with the real. The more high-tech we become, the more nature we need.
—Richard Louv

The immediacy of Richard Louv’s message in Last Child in the Woods: Saving Our Children from Nature-Deficit Disorder galvanized an international movement to reconnect children with nature. Now, in The Nature Principle, Louv reaches even further with a powerful call to action for the rest of us.

Our society, says Louv, has developed such an outsized faith in technology that we have yet to fully realize or even adequately study how human capacities are enhanced through the power of nature. Supported by groundbreaking research, anecdotal evidence, and compelling personal stories, Louv shows us how tapping into the restorative powers of the natural world can boost mental acuity and creativity; promote health and wellness; build smarter and more sustainable businesses, communities, and economies; and ultimately strengthen human bonds. As he says in his introduction, The Nature Principle is “about the power of living in nature—not with it, but in it. We are entering the most creative period in history. The twenty-first century will be the century of human restoration in the natural world.”

Richard Louv makes a convincing case that through a nature-balanced existence—driven by sound economic, social, and environmental solutions—the human race can and will thrive. This timely, inspiring, and important work will give readers renewed hope while challenging them to rethink the way we live.

Save this product for later